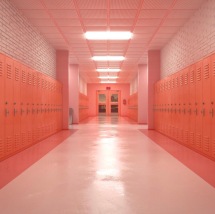 As a straight, white, cisgender female who grew up in an affluent community in San Diego, California, I am very privileged in that I identify with many of society’s dominant groups. While my association with particular dominant groups has certainly influenced my values and perspectives, the challenges I have faced as a member of other subordinate groups have more transparently impacted my worldview.

For example, although I was raised Catholic, I developed a more agnostic approach to religion throughout high school as I began to recognize the sexism deeply ingrained in the Church. In this way, my position as a woman allowed me to examine and modify an aspect of my identity that I would have perhaps overlooked if not cognizant of and disturbed by gender bias. Similarly, my gender has greatly influenced my reaction to the majority of media that commodifies and sexualizes women, for many advertisements and films seem to assume the male gaze limiting women to maternal, housekeeping, and aesthetic roles.

Furthermore, I was diagnosed with ADHD last year but have a complex relationship with this aspect of my identity as my disability was unknown to me for the first 19 years of my life. Growing up, I noticed that I spent a substantial amount of time on assignments compared to my peers, but when I asked my parents and teachers about the possibility of a learning disorder, they claimed that my grades did not indicate a disability. Therefore, I attributed the excessive amount of time spent on assignments to my perfectionist nature regarding performance in school. My diagnosis during my freshman year of college was empowering as I felt proud that I had managed a successful schooling career despite a disregarded learning disability.

The invalidation of my learning disability throughout my life corresponds directly to the narrow manner in which ADHD is portrayed in media. For example, an episode of ABC television series Desperate Housewives details one mother’s abuse of her rambunctious twin sons’ ADHD medication as a way to cope with the hectic lifestyle she experiences due to their disorder. In my experience, the media overwhelming represents ADHD as it relates to young children with excessive energy and poor school performance therefore excluding other forms of the disorder that do not fit this stereotype.

Moreover, Kendrick Lamar’s song “A.D.H.D” offers a more relatable representation of the disorder by touching on the idea that ADHD has increased with the rise of technology and social media that results in shortened attention spans. For example, he raps, “We never do listen/ ‘Less it comes with a 808/ Playstation and some drank (Technology bought my soul).” He explains that our obsession with technology has resulted in a culture only capable of focusing on what they deem entertaining. While slightly critical of the disorder, I appreciate Lamar’s representation of ADHD as it could very well relate to someone like me who was diagnosed as an adult.